In a proper and just world, Tera would’ve launched in 2004 and rewritten the MMO rulebook instead of WoW. I realize that I’ve just spewed outright blasphemy and am in extreme danger of being stricken down by a bolt of divine lightning, so let me explain. Traditional MMO combat – as popularized by Blizzard’s genre-stomping behemoth – isn’t exactly thrilling. While PvP and high-end PvE ratchet up the mobility factor a bit, leveling generally involves all the high-octane action that’s typically associated with being a tree. That is to say, you root yourself in one spot and flip your brain switch firmly into the “Off” position. Tera, by contrast, requires skill-based swinging and fleet-footed acrobatics, leading to adrenaline-pumping last-second dodges against even the most mundane of foes. Also, which would you rather play as: an ugly old gnome or an adorable (and vaguely horrifying) dog person? I rest my case.

My starting statement is, however, a double-edged sword. On one hand, Tera would’ve made for an excellent neanderthal to kick off modern MMOs’ evolutionary cycle. Matched against said modern MMOs, however, Tera’s non-combat elements (quest structure, crafting, story, PvP, etc.) feel woefully behind the times – like vanilla WoW as opposed to post-Cataclysm WoW. It is, to be frank, the Big Foot of massively multiplayer role-playing games. Sure, it’ll put up a hell of a fight if backed into a corner, but at the end of the day, it feels like an out-of-place missing link – not entirely stuck in the past, but definitely not ahead of the curve.

So then, let’s start with the good: the combat – as I noted in my first week impressions – is largely sublime. Climbing into my warrior’s upper 30s, though, taught me to appreciate it even more. Put simply, standing still is suicide – especially once Tera starts tossing larger groups of enemies into the fray. Fortunately, my red-skinned Medieval Darth Maul had a whole host of equally potent single and multiple target skills by the time I hit level 30, and I couldn’t help but feel this incredible sense of control.

If a bad situation sprang up, I felt confident that I could switch gears and tackle it head-on. One Big Ass Monster (Tera’s world-roaming boss equivalent – and yes, they’re actually called that) vs one small ass me? Sure, it’d take upwards of ten minutes, but – even against a BAM’s (sometimes literally) earth-shaking attacks – my carefully timed dodges and pitter-patter strikes could win out in the end. As for a crowd of weaker enemies? Please. They bunch up in their neat little groups, and I mow them down. The buddy system, as it turns out, isn’t exactly an efficient combat formation.

This is the first MMO where I can say position – not maximizing DPS – drove my skill choices from moment-to-moment. If a dodge landed me just outside attack range, I’d whirl around with a rangy Legend-of-Zelda-style area of effect strike and then charge back into combo position with a skewering shishkabob strike. Regardless of where I was, I always felt like I could be where I needed to be in mere seconds. It may not sound like much on paper, but in practice, it made me feel like I – not some series of background dice rolls – decided my fate. With proper play style adjustment, my dual-wielding, incredibly rogue-like warrior even made a serviceable tank. 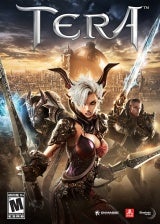 And it’s all impressively varied from class-to-class, too. My Slayer alt, for instance, moved with all the grace and agility you’d expect from someone wielding Cloud’s buster sword the way it’d actually work, which necessitated a complete shift in timing. As a result, strikes were far harder to land, but oh so deliciously satisfying – with craterous knockdowns befitting of a cleaver big enough to give other cleavers wedgies and then hang them from flagpoles. Even healers and spellcasters require far more mobility and manual targeting than their comparatively snooze-worthy meter-monitoring cousins in other MMOs.

Problem is, many of those class-defining details hardly even matter outside of BAM battles and dungeons. Quests shamelessly recycle slight variations on the same enemies until leveling’s just a giant blur of Big Things, their accompanying legions of Small Things, and the occasional Thing You Feel Terrible About Killing. So one quest might ask me to hunt crowds of tiny rock creatures, and then – a single level later – I’m busting them into even tinier rocks again, only now they’re called “scoundrels” instead of “minions” or something along those lines. I was also, at varying points, forced to kill fairies and unicorns. Given that you can play as a little bunny girl race (which, in itself, is already disturbing enough), this means you can use a little girl to kill some of the things little girls are allegedly made of. There is nothing right about that sentence.

The end result, however, is that PvE combat strategies rarely ever change, and questing – which consists almost entirely of “kill 10 of these, 25 of these, etc” missions tied loosely together by an extremely generic, badly told “storyline” – quickly descends into eyelid-tugging slog territory. As Bon Jovi once said: “It’s all the same. Only the names have changed.” Granted, he was talking about cowboys, steel horses, and comparing guitars to revolvers, but even with that holy trifecta of intrigue, I doubt Tera’s tired quest structure could manage to be of any real interest.

Group play, then, really and truly saves this one – at least, initially. In almost complete contrast to solo questing’s thinly veiled level treadmill, it’s fast, frantic, and rewards tactical complacency with a hulking monster claw to the clavicle. A basilisk BAM, for instance, might charge, pounce, spin abruptly, or leap sky-high and come crashing down, potentially crushing the whole party. Meanwhile, the vampire (sorry, “vampir”) centric Sinestral Manor’s final boss – which could best be described as the result of a radioactive spider being bitten by a radioactive copy of Gears of War – is generally less agile, but prone to launching fiery ranged projectiles while you’re distracted by its smaller (still disgusting) offspring.

Admittedly, these boss tactics don’t sound tremendously different from those in other MMOs, but constant movement and skill-based combat make BAM battles feel less like traditional tank-and-spanks and more like Monster Hunter’s intimate encounters with Godzilla’s kind. That said, there’s still not enough variety – especially given Tera’s timesink nature – and even BAMs grow tedious in the game’s upper levels.

Unfortunately, the rest of Tera ends up feeling like a flavorless outer shell you have to crush your teeth on to reach its BAM kabiff-pow-thwacking core. The game’s opening area – which will eat up five or so hours of your time – varies from mediocre to out-and-out awful, and even an inventive (though brief) prologue that lets you try out your class at level 20 squanders its potential on a confusing, awkwardly paced execution. And while things finally pick up at around level 20, questing actually gets more mundane as you progress, with meaningful skill gain perplexingly cutting off at around level 40.

Beyond that, gathering – while cleverly paired with mini-buffs to better tie it into the flow of combat – feeds into a tedious crafting system that’s also borderline useless thanks to the ready availability of better items via loot. And while there is PVP, it’s limited to random open world skirmishes at the moment, as previously promised PVP battlegrounds won’t be implemented until the end of summer.

I will, however, make special note of Tera’s election system. Basically, its purpose is to elect a series of “Vanarchs,” who – according to Tera’s official website – are responsible for “setting and collecting taxes from vendors” and “activating special shops and skill trainers in settlements, opening new teleport routes, and more” in Tera’s various provinces. Unfortunately, I can’t really evaluate it yet, as it only kicked off at the start of the week, with the first batch of elections set to wrap on June 1. Given its strict level requirement (50) and competitive nature, however, it’s the closest thing Tera has to a unique endgame right now. No, the political system probably won’t be quite as chaotically player-driven as, say, EVE Online, but I’m extremely excited to see where these monthly bursts of democracy go. If it lives up to all that promise, we’ll definitely tell you about it.

I am, however, rendering a verdict on what Tera is right now – not what it will be in a number of months. And while its combat system is a bonafide cannon ball into an otherwise stock-still (Vindictus excluded) sea of fantasy MMOs, a heavy anchor of mediocrity nearly sinks the whole production. There’s nothing damningly egregious about, say, Tera’s same-y quests or generic swords ‘n’ sorcery ‘n’ giant apocalyptic robot tale, but it all comes together to suck away any sense of vibrancy or moment-to-moment fun. Bluehole’s MMO debut occasionally makes desperate, clawing grasps at greatness (see: BAMs, dungeons, combat’s rarely applied nuances), but seems mostly content to trudge along nonchalantly without ever really applying itself. I’d hand this one an “A for effort,” but most of Tera – beyond its combat – is out-and-out lazily designed. No doubt there’s a wealth of promise here, but as is, I can only recommend a subscription to avid players who’ve completely exhausted other, more robust options like WoW or Rift, or absolutely cannot wait any longer for Guild Wars 2 or The Secret World.